Skip to content
Home » by: Steve Bowcut » The Importance of Networks in Electronic Security System Design

Many would argue that the most important part of any electronic physical security system is the network on which the system resides. The switches, adapters, converters, and other network devices, not to mention the network installation and configuration techniques, will have a significant impact on the performance and usability of the security system. Why then, you might ask yourself, do we as an industry spend so much time and money trying to understand the subtle differences between the various camera manufacturers?  All the while, relatively speaking, ignoring the components that make up the network that this new whiz-bang surveillance system is going to use for power and communication?

Certainly, there are many answers to this question. You may even disagree with the basic premise.  However, a quick comparison of the number of cameras, IP intercom, and access control system vendors at any security trade show compared to the number of network switch and component manufacturers should be enough to convince even the most ardent skeptic that we are seriously weighted toward the functionality and sizzle of devices, such as cameras.  To some cameras represent the very definition of a security system. It seems natural; it’s a camera system for heaven’s sake. Why not focus on the camera piece of the system?

It’s about balance. A well-designed system will include the best-in-class security devices as well as flexible, smart, and integrated network components.

To gain a better understanding of the role of the “security network” in the overall “security system,” Brilliance Security Magazine spent some time talking with Dennis Troxel, Principal Sales Engineer for Transition Networks.  Our description of the capabilities of this specific manufacturer is not intended to imply that other manufacturers are less capable, rather to highlight what modern network switches can add to the improvement of the overall system design and ease of operation and maintenance of the system.

DMS software can automatically discover and remotely configure attached IP addressable powered devices.  Although this functionality was undoubtedly designed to help the integrator during the initial installation of a new security system, Dennis related to us how some integrators will use a Transition Networks switch to identify and locate devices that are previously installed on legacy systems which have grown in an uncontrolled and undocumented manner. 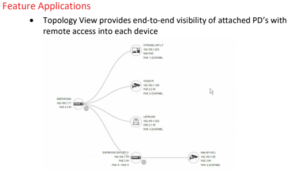 In the demonstration that Dennis provided us, he showed how the DMS software will create a graphical topology view of the security devices on a network. This feature provides a graphical view of all the devices and their relationship with the switches that make up the network. Additionally, the software will also allow the discovered devices to be placed on an imported floor plan or a Google Maps view so the user or installer can see where these devices are located within a building or on the property. 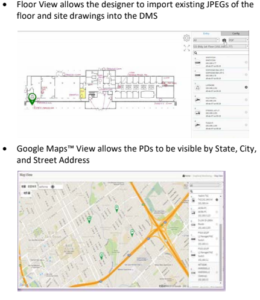 Dennis described the Auto Power Reset feature as a huge time saver for service providers. Rolling a service truck to find that a simple device reboot was all that was required is very costly. The ability to program the system so it will automatically reboot a device if it goes offline, and then monitor the device and report if the situation continues, will save time and money.

Another time-saving feature that Dennis discussed was the remote management capabilities of Transition Network switches. Once cameras or other security devices are installed and discovered by the DMS software the devices can be set up and configured by the installer using this software rather than connecting to the device at its location in the field. 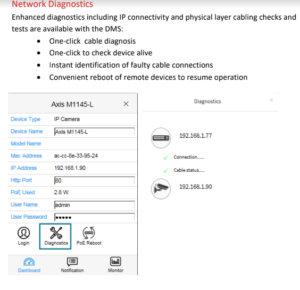 Taking this ease of operation idea one step further, Transition Networks is building integration with popular VMS software platforms. Their integration with Milestone Systems was announced earlier this year with additional integrations on the roadmap.  This type of integration allows for the setup, management, diagnostics, and daily operation of the entire system, including the network, to occur from the VMS GUI.

Imagine the ability to not only see the PoE power class that was negotiated when a device was installed but also see the actual power being used by any device on the network. With this feature, the efficient use of available network power becomes much easier.

These switches allow the user to diagnose a host of potential problems at the switch.  Additionally, the cable infrastructure can also be diagnosed.  An incorrectly pinned connector or a break in the cable will be located and reported.

To get a better idea of how to interact with the Transition Networks Device Management System software we suggest you watch the below video.