Homeowners are increasingly aware that security features could affect their finances further down the line and are opting to modernise their locking systems.

In the UK, insurance companies usually ask for the type of locking systems installed on all outside doors of a house before providing a quote, with some requiring that homeowners have five-lever mortice locks fitted to qualify for cover.

For customers with locks that meet British Standards, insurance companies may offer discounts on policies of up to 5% — but they usually insist the locks be on ‘all exit doors and key-operated locks on all ground floor and accessible windows’ or similar.

If you look across the pond to the US, there is a rise in homeowners upgrading their security systems by using smart technology. This can range from wireless cameras and motion sensors to smart locking systems and even security drones.

According to a recent survey, almost half of US consumers (48%) planned on purchasing at least one smart home device this year and most wanted to use it for home security.

A 2016 study showed that 40% of people were most excited about connected cameras, 26% were eager to purchase video doorbells and 13% were keen to add smart locks to their homes.

Despite this, some shoppers have voiced concerns that smart technology could put them at risk of becoming a victim of personal data theft. However, recent discoveries from the University of North Carolina’s department of criminal justice and criminology shows 60% of burglars avoid households with smart home security features.

Joe Halsall, Digital Marketing Manager at door and window specialists Origin, said: “Many people are taking the opportunity to modernise while gaining peace of mind in terms of both valid home insurance and security. 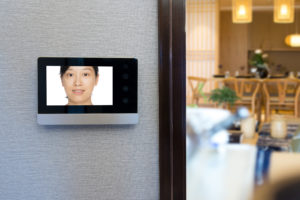 “Although modern doors are manufactured to be extremely robust with built-in security features, many homeowners are looking for that extra peace of mind, and the addition of devices such as video doorbells can provide just that.”

It was reported in March this year that there had been a 30% growth in police recorded robberies as well as a 6% increase in burglary offences in England and Wales.

Despite these worrying findings, research showed that over a third of burglars were able to successfully gain entry to a household through the front door.

Joe added: “We’ve had a number of customers finding their door had an outdated locking system that didn’t meet their insurance requirements. The ability to update their door to something more modern, and put off potential intruders in the process often seals the decision.”

It can be difficult to establish whether door locks comply with requirements, yet policies can be declared void if a homeowner incorrectly states that they do. This means insurers will not pay out if a break-in takes place.

In response, some insurance companies are removing this requirement. A spokesperson for Aviva said: “We’re currently making the process of taking out insurance easier by reducing the number of questions asked. One of the things we’ve focused on is consumers being asked what locks they have, which we don’t believe is necessary.”