The “Uncommon” Is Becoming the “All Too Common”

Recently, on April 23, 2018, a white rental van intentionally plowed down a crowd of pedestrians in the Toronto suburb of Richmond Hill, killing ten and injuring 15. On October 31, 2017, an Islamic terrorist drove a rented pickup truck into cyclists and runners for about one mile of the Hudson River Park’s bike path in Lower Manhattan, New York City. The vehicle-ramming attack killed eight people and injured eleven others.

This has been happening for some time – vehicles being used as weapons. On December 19, 2016, the news exploded with information about a vehicle attack on a Christmas market in Berlin that killed at least 12 and injured more than 50. Less than a month before, the U.S. State Department had warned about such attacks in public places throughout Europe, saying that extremist groups including the Islamic State and Al Qaeda were planning to focus on such locales during the Holiday Season.

Indeed, both terrorist groups have called on followers to use trucks, in particular, to attack crowds. On July 14, 2016, a truck plowed into Bastille Day vacationers in Nice, France, killing 86 people. On November 28, 2016, a car ramming attack and mass stabbing occurred at 9:52 at Ohio State University’s Watts Hall. The attacker, Somali refugee Abdul Razak Ali Artan, was shot and killed by the first responding OSU police officer and 13 people were hospitalized for injuries, nine of them struck by the vehicle. Luckily, nobody was killed.

And, an intoxicated driver injured at least 28 people when smashing into the Krewe of Endymion parade, the largest at Mardi Gras, at a yet unprotected intersection on February 25, 1217. 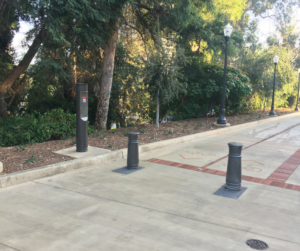 To stop such attacks, security professionals need to be cognizant of two different types of vehicle access points for such incidents to occur. The first would be in a location where the primary use is pedestrian but, frequently, vehicles need to pass through. An example could be a square in which the maintenance truck comes through to clean the square periodically. Other areas could be those locations with restricted parking, such as at a shopping mall, in which a street has been permanently cordoned off for pedestrians and the occasional delivery truck. Such access points are well served by bollards, some moveable that go up and down to let vehicles through and others fixed or stationary.

The other access points are those that are temporary. At a stadium, traffic may need rerouting for sporting weekends. The city is having a parade. In either case, sections normally open to traffic will be closed to create pedestrian paths and gathering points. However, these areas still have a need for delivery trucks and certain other authorized vehicles to enter. These locations are best protected with crash-rated portable barriers that erect in 15 minutes and are then removed once the event is over.

Bollards – the Most Used Permanent Solutions

Bollards are aesthetically pleasing and let pedestrians move between them in non-roadway applications. Bollard systems operate individually or in groups. They are used for intermediate level security applications. Individual bollards are up to 12.5 inches in diameter, up to 35 inches high and are usually mounted on 25 inch + centers. They are tested to stop and destroy an attacking vehicle weighing 10,000 pounds moving at 65 mph or a 20,000-pound vehicle moving at 45 mph. Typically kept in the “up” position to stop traffic, moveable bollards lower to allow vehicles through. 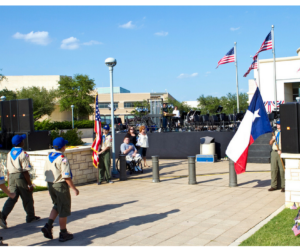 Ranging from faceted, fluted, tapered, rings and ripples, colors, pillars, to shields, emblems and logos, bollards look nice and are versatile. Buyers can specify ornamental steel trim attached directly to the bollard, or select cast aluminum sleeves, which slip right over the crash tube. Bollards can be galvanized for corrosion resistance, fitted with an internal warning light for increased visibility and engineered to suit high traffic volume. If damaged, simply slip off the old and slip on the new.

Fixed post bollards are available to secure the sides of roadways with the same crash rating and appearance as their moveable cousins. Versus cement barriers such as posts and pots, many campuses prefer fixed post bollards for several reasons. When hit, cement posts and pots can explode, literally spreading shrapnel throughout the crowd, potentially creating numerous injuries. Shallow foundation bollards can be installed within sidewalks or on top of concrete deck truss bridges as well as conform to the inclines and turns of a locale.

The fixed bollard, which does not go up and down, provides a significant blocking device solution that continues to challenge security directors faced with threats such as stopping a vehicle from plowing into a city center or park and keeping vehicles on the other side of the perimeter. They let security personnel meet a long-standing challenge – how to easily install bollards on shallow substrates, including those that are not level or have turns.  No longer do locations, such as curves on hills, the upper levels of parking structures and other unprotected locales have to use unsightly ‘make-do’ solutions to stop car bombers or wayward drivers.

By their very nature, terrorist attacks and errant drivers are unpredictable and predicated on surprise.  Staying one step ahead by identifying vulnerable areas, and securing them, is critical to staving off vehicular attacks. That means being able to deploy security equipment in tough conditions, at a moment’s notice. Such equipment has existed for several years in the forms of portable temporary barriers. 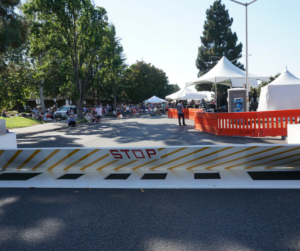 Terrorists typically don’t go where they see barricades, so placing them wherever possible attacks can happen reduces security risks dramatically. Temporary barriers are often used to protect facilities while permanent ones are being built. Plus they’ve even been effective for the long-term where physical conditions preclude permanent solutions.

Their most common use, though, is for when vehicle access is required temporarily. Parking for the football game, a grand opening for the new facility and open houses are temporary events needing only a temporary solution. These barriers can be deployed quickly and effectively, even in places where it’s impossible to excavate for a permanent foundation.

Moveable self-contained barricades can be towed into position to control vehicle access within 15 minutes to answer the need of organizations that quickly require a temporary barricade system to address a specific threat or secure a facility during special events. These mobile deployable vehicle crash barriers carry an M40 rating, stopping 30,000-pound vehicles traveling 40 mph. No excavation or sub-surface preparation is required. Once towed into position, the portable barricade uses DC-powered hydraulic pumps to unpack and raise and lower itself off its wheels. There is no hand cranking. Wheels are stored along the sides and the vehicle ramps fold out, completing the implementation. To move the barrier from that spot to another, the procedures are just reversed.

A second version, light enough to be towed by a golf cart and set up in only 10 minutes, provides an ASTM crash rating of P40, which means it will stop a 5000-pound vehicle going 40 mph. With no foundation or electrical hook-up needed, two people can set up and take down the barrier in minutes. A self-contained power system provides all the power necessary to raise and lower the unit onto its trailer and open and close the barrier. This battery-powered system re-charges with a solar panel or external means. Controls can be locked or operated at the barricade or remotely.

Differing from the “hard stop,” wanted with anti-terrorist barricades, the Soft Stop technology of the portable barrier decelerates and stops the vehicle over a short distance. This is important because, in many cases, the tragedies that the portables negate are accidents, such as happened several years ago at a Farmer’s Market in Santa Monica, Calif. Authorities want the vehicle stopped but they also want to minimize injury to the driver. 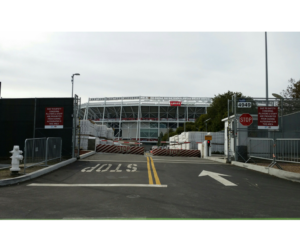 No Application Too Large or Small

Protecting people from vehicle attack is no small responsibility; it’s becoming mandatory.  Knowing that you’ve got the right equipment in place to secure the campus from vehicle threat and prevent what is becoming all too common human tragedy brings a peace of mind that no amount of money can buy.  Carefully researching available options and consulting with experts will ultimately lead to the right solution in helping you protect your campus from vehicle-based terrorism.