At the recent GSX Conference in Chicago, we ran across a very interesting security solution that nearly all of us have used dozens, if not hundreds, of times but may not even be able to name the manufacturer.  One of the most maligned and complained about security products ever, but extremely necessary and effective.  Often cited as the quintessential example of the juxtaposition between security and convenience, we are, of course, talking about x-ray screening.  Most prevalent at the airport passenger and baggage checkpoints, x-ray screening is a key component of national security at all types of ports.

So what’s so interesting?  What we found so interesting at the GSX Conference was the relatively new ability to provide a mobile, van-mounted, x-ray screening checkpoint.  It has been a game-changer for DHS and is now available to the commercial market.

We sat down with Dr. Michael Frunzi, Business Development Manager at Smiths Detection to learn more about this new offering.

Smiths Detection is, by far, the leading provider of stationary x-ray screening equipment.  Used in airports and border crossings around the world, Smiths Detection has manufacturing facilities established in France, Germany, Malaysia, the UK, and the USA, with some of these also serving as R&D centers of excellence. They provide sales and service centers in 17 countries enabling global coverage. Driven initially by aviation security, their products are used in roughly 80% of checkpoints where a passenger enters the sterile zone of the airport. They also have more sophisticated CT based equipment installed under many airports scanning the checked baggage. 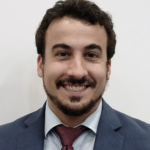 Dr. Frunzi explained, “We screen for firearms, knives, hammers, any type of weapon, explosive devices, narcotics, or just about any type of contraband. An example would be a sports arena that could use our solutions to scan for alcohol. Our technology can tell the difference between water and gin & tonic, for example. The x-rays have the ability to discriminate between items based on how dense they are but also the elements that make them up.”

He continued, “A great example of narcotics detection is a shipping manifest, of a particular parcel, claims the contents within are beauty supplies but they receive an x-ray image of a giant bag of pills. Officers could then determine that it was likely a fraudulent manifest.

We use the image to reveal the shape of an object, the chemical makeup of the object to some extent, and the density of the object.”

Smiths Detection has plans to help us get through the airport faster too.  Generally speaking, an airport checkpoint conveyor belt is in motion only about 30% of the time. This means that we are moving through the checkpoint at only 30% of the maximum speed. Since the x-ray scanner is typically the bottleneck, if they can move the belt more, and stop the belt less often, then the lines at the checkpoint will automatically shorten.

Dr. Frunzi said, “We are developing new technology. We have just won the first award from TSA to provide 300 high-tech CT machines (3D x-ray) at passenger checkpoints. So, eighteen months from now, airports operators using a CT scanner could have the capability to let passengers keep a laptop, a tablet, or liquids in bags, depending on TSA regulations. Airports know that the less time you spend monkeying around with your bag, the more time that belt is moving, the quicker everyone can get through the checkpoint and to their gate.”

Having recently fulfilled an order from DHS for mobile, van-mounted, x-ray screening vehicles – dubbed ScanVan – Smiths Detection is now offering this solution to providers of security at concerts, sports arenas, convention centers, campuses, and at other places where temporary checkpoints are needed. 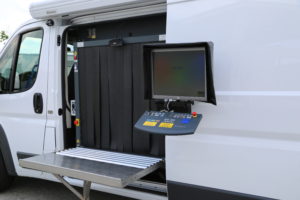 Dr. Frunzi explained, “ScanVan is the same type of x-ray machine that we have at the front door of a courthouse or at an airport checkpoint. The tunnel opening is larger than at the airport so it can accommodate larger parcels. The ScanVans were specified by CBP. They gave us the criteria to meet and we submitted a design and were awarded the contract. We have deployed over 50 ScanVans to them, to date. These vans are often deployed along the border. They are completely self-contained. All they need is a tank of gasoline. Once they arrive at their destination you can have a fully functioning x-ray machine operation within five minutes. They were specified with a low profile which enables them to be parked anywhere you can park a passenger car. 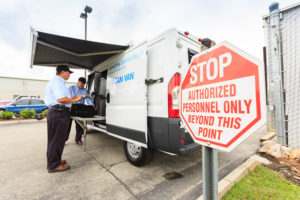 We are taking that design and are now moving it into the commercial market. Event security companies are showing great interest in these ScanVans. It is not feasible to fortify locations where the security need is only temporary. The flexibility of these vans allows all types of security organizations to quickly meet their changing security needs.”

ScanVan is built on a RAM Promaster 1500.

Many arenas are also screening media since they have virtually free rein of venues. Media have giant cases that could have goodness knows what inside. This is just the first step in how security personnel will expand who and what will get screened at their venues.  ScanVan could provide the flexibility needed to set up a checkpoint at any location around the stadium with only a few moments notice.