Brilliance Security Magazine sat down with Jim Viscardi, Vice President of the Global Security Division for Metrasens at the GSX Conference in Las Vegas.

We asked Jim to tell us what’s new at Metrasens and what they have been up to lately.  He told us about how they have spent the last 6 months or so working with a few stadiums to help them create protocols around the use of their Proscreen 900 which is their fast throughput weapons of mass casualty screening device and then help them understand how fast throughput screening fits into their overall layered security approach. 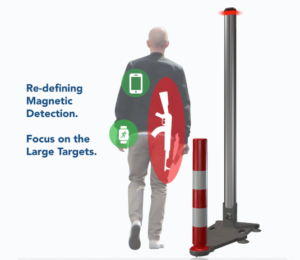 A device such as the Proscreen 900 is designed to become the first layer of defense against weapons of mass casualty.  They are effective because they provide a means whereby the first layer can be pushed out further away from the asset you are protecting.

Everybody has a screening technology at the front door or at the gates, but the Proscreen 900 is designed to help you push the first layer of defense even further out than that.  Out into a parking lot, as an example. In security, time equals safety, so the more time you can give to law enforcement or security personnel to respond to a threat, the more successful they are likely to be.

Jim said it was important to note that because of the versatility of their system they can easily integrate into a facility’s existing security protocol.  Their equipment can be deployed just about anywhere, so, for example, if a stadium has four main entrance points, they don’t need to change that. They can use the screening devices at those points, or even further out into the approach area.

Each sensor has a range of about five feet giving flexibility to how they are deployed.  You can have people file past in a line or just deploy them in a staggered formation across a wider entrance point. With a throughput of 50 to 60 people per minute, they won’t add to a potential bottleneck situation.

In some cases, this technology might be used with a PSIM and integrated with surveillance cameras.  This will give the ability to alert an operator and trigger cameras should a potential threat be pick up by the screening devices.  This provides situational awareness that gives a security team the ability to mitigate a potential threat long before it enters their facility.